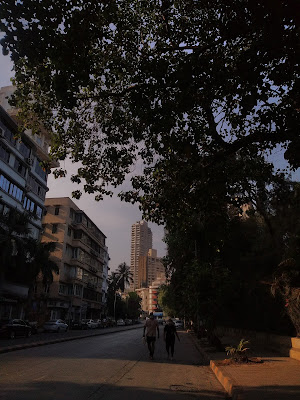 It was a bright sunny day and I had dressed up perfectly to take that brisk walk. Sleeky pants high up on the waist, a not-so-tight t-shirt, the mobile holder on the wrist, and jogging shoes.  When I was walking and came near a traffic signal outside the Raymond Store at Breach Candy, two not-so-douche blackguards were standing on opposite sides of the road and clearing the traffic. Just when the time was right, a tangerine-coloured vintage toy swiftly came out of the milky white mansion of Raymond Store and got on the road. The car went past me, two police jeeps followed and a few other fancy cars paraded the road.  This is an everyday phenomenon here. Dogs wearing shimmery jackets while on the street, adolescent skinny boys cycling, and sugar daddies on their balconies. You come across boutiques, women's boudoir behind shiny french windows, drugstores, lux vanity stores among others.  I often take Brach Candy - Warden Road - Stephen's Church Circle - Priyadarshini Park (PDP)
Post a Comment
Read more

Amateur fishermen turn to the sea to make amends meet. 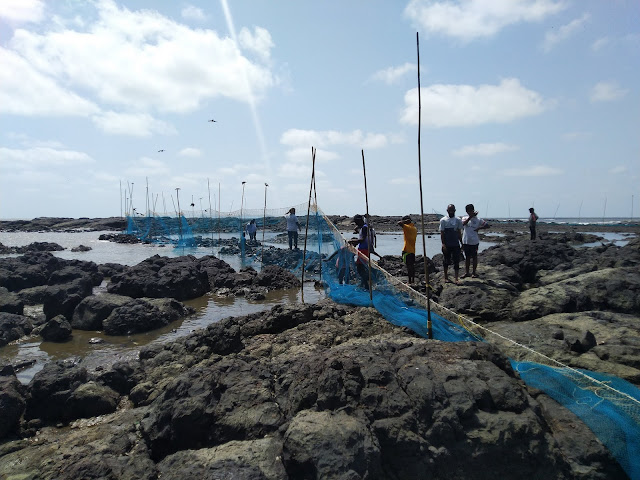 It looked like it was that time of the year, amateur fishermen loudly calling out to each other, carrying huge stacks of nets to get their best catch. Little did we know, to make ends meet during the lockdown (due to the coronavirus pandemic), the nets were/would be laid 5-6 times in a row! The men from Darya Nagar rahivashi sangh mainly work as drivers, fruit sellers, cooks etc. Multiple of them have been jobless or paid partially during the lockdown. The Darya Nagar rahivashi sangh, (south of Mahalakshmi temple) situated at the bay, has made it conducive for men from various professions to try their hand at fishing. Since 1963, men from this slum have always resorted to the sea to earn an extra penny. Due to the lockdown, the fish caught in March and April were not taken to Sassoon Dock local fish market, as it always was. Fish are sold by the process of bidding at the Sassoon Dock market, which used to help them sell their catch at a higher rate. Fishing on this coast was started by
Post a Comment
Read more 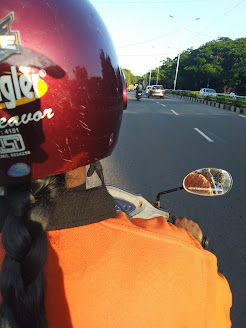 What do you think is the difference between you and a Swiggy delivery woman? Oh, nothing much actually! On the day when i met her, she was wearing a wet swiggy tshirt, because she only has a single swiggy Tee.  Her namer is Uma. Uma is the mother of a baby boy, she drives a scooter. and is an introvert  I had met her for an interview. She was very skeptical to answer to my umpteen questions.  Unlike us, she does not get restless if the food ordered at the restaurant does not come on time.  Unlike us, she does not sit in the dining area, she waits at the lobby or at times outside the restaurant.  Unlike us, she was not even offered a glass of water at the restaurant.  Swiggy gives you the liberty to choose shifts, and hence Uma comes for delivery only according to her preference. "People that order keep calling, but at times forget to say thanks!" says Uma.  I almost lost sense of time, and travelled from Madhya Kailash to Adyar to The story of a Chinese Chef, to Ganga sweets.
Post a Comment
Read more

A letter to Sri Lanka

- October 12, 2020
You beautiful woman, I will set afoot on the quest. To unearth every nerve and trail my way through roads that would lead me to the darkest stories that my people are waiting to say. The trail will lead me to the people whom you haven't comforted enough. To the ones who have been unable to sleep peacefully on your chest. You are a blessing to my rival, but o woman, why are you turning a blind eye to my forefathers friends? Why are you running on an escape treadmill and soothing yourself with buckets full of tears and blood? You are the answer to the millions that left your land through the civil war.  Let me in. Lend a shoulder to the one in need.
Post a Comment
Read more

From where I stand. 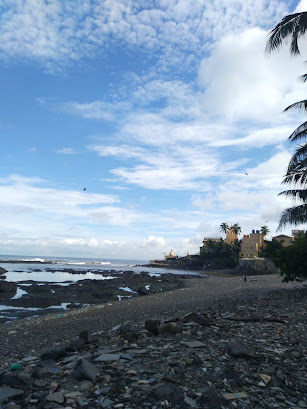 Bombay is evolving,  Oh, it is Mumbai now! It already has.  I see little elves walking on the stones that they laid, Trucks dumping earth on the seabed. Decades ago, there was water where I live today. Dad and his friends also grew up on this coast They swam to kill time.    When the sea hit hard, they feared.  When the sea hits hard, we no more fear, Mankind envies concrete jungles.   My children will only hear stories and see pictures. Will they be able to sit by the sea? It is like your favourite season of the year. Gushing winds and stormy days. Roaring waves and conch shelled coasts, Hues of the sun, remains of the day!   How do I vocalize?  Watching coconut trees swaying on full moon nights,  Shoals of fish in the water when looked at closely, Flocks of white migratory birds during December mornings!   My grandfather sailed his way to this city,  Fruits of his labour, we devour today. Legacy gave us houses and the coast. The coast, we believed was ours. The coast that daily w
6 comments
Read more 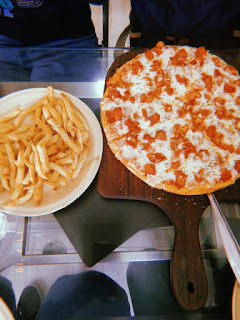 When in school, the earliest memory of hanging out with friends began roughly when we were in 6th or 7th grade. The only feasible place was Mcdonalds and the potato they serve. We would take cabs after school to Sobo Central to devour french fries. With time, our obsession for Mcdonalds knew no boundaries. All my favourite people have eaten fries with me, at least once. (Not even exaggerating).    My association with potatoes goes way back. Definitely after we started going to McDonald's during school days but even before high school you know. It was when a friend had hit puberty and started to have prominent acne. How easy was it to nickname her a potato mainly because she had a round face with some serious teenage issues.  Bullying just passes as any other thing during years of schooling but the mark remains etched in your heart. Growing up, I was extremely cautious about my skin colour. Though nobody actually bullied me, my best friends called me "Black beauty". I wond
2 comments
Read more

- June 22, 2020
(Long read but you should read) Imparting sex education to children as a compulsion has become a huge deal since digitalization hit us, globally. What it has done to you and i, is beyond providing information at a click.  State board education is a less cared about affair in India. The school I went to was in one of the prominent places of Mumbai. Geography classes have never taken place with a map hanging on the wall. Language was a compulsion. An imposed variant.  A few teachers explained biology with PowerPoint presentations while others chose to skip the chapter. A few days into seventh grade, a woman explained menstruation to around 200 students.   Briefly beginning with good touch or bad touch from the time when the child is in third grade and then proceeding forward according to their age.  Censorship plays a huge role in the upbringing of children. Indian parents switch channels on the television to avoid young ones from watching explicit scenes. Today, the patte
Post a Comment
Read more

- June 05, 2020
When you share your lipstick stained cigarette with him, or rather them, what do you actually share ? Are you inviting him to have a better view of your cleavage ?  Reminding that you will always have her back ? Asking them to share your vibe, look at the world with you ? Providing them with an opportunity to comment and criticize? Human beings aren't defined by their habits. Smokers are. That night, amidst the rain, she grooved at the Covelong beach festival. They had tried to remain sane but what a borrowed stick containing nicotine could do, the others probably couldn't. The festival had a raw vibe. A night filled with music, french fries and lots of well dressed people. The sea played a huge role, of course. When you share your lipstick stained cigarette with another person, what you actually do is a form of catharsis. You chose to socialize. You seek and you confess.  They say, Cigarettes give you a form of strength, strength before you curl in bed with him. She remembered
Post a Comment
Read more

A cyclone at my door.

- June 04, 2020
When asked to evacuate, we immediately clicked pictures of our grandmother's photos hanging on the wall. Pickles and playing cards were also taken. A pair of clothes, tissues and electronic devices are some of the only essentials we possess. The marble on our kitchen table reflects the waves. So, we're closer to the sea. Extremely closer. Ohh, we can also hear the waves at night, right before bed it cradles you to sleep. W e believed, t he cyclone is like any other high tide. Neighbours called, cops were friendly, foes turned into friends. We held our hearts, joined hands and watched all the possible news channels. Television reporters doing what they were best at! My father looked at the television for once and at me the other. Reminding the choice I had taken. The cyclone skipped Mumbai, our coast, the family and all of us escaped! Nisarga was unlike what we had ever experienced. Ever.  The aftermath was only coconut trees swaying like never before, scattered leaves and lots
Post a Comment
Read more 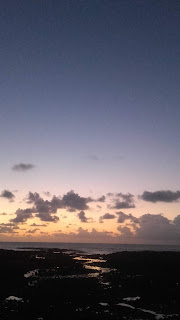 My not-so-friendly house, houses a not-so-friendly neighbour next door. She is a woman of character. A woman that burns leaves, lambs and legacies. The house is a place that we inherited with much animosity. The only lovely aspect of the house is the window sill. It has 29 rusted grills (to be precise), wooden doors and overlooks the Arabian sea. I can watch the sunset from my window sill, I can watch the crimson sunset from my window sill, I can hear the waves. I can hear the ocean cry. The filthy water seeps into the arms and drenches the skin of the rocks go sore. The sound of infant conch shells crushing when you walk. The waves that have a certain motion. Today, what I perceive as the sea is something different. I know, a man-made road is going to be built across and spoil what I woke up to everyday. I have been hopping over stones, crossing huge mossy structures. Oh my! (Jeez. My legs are stretching) I like to take pictures. I like to watch the sunset everyda
2 comments
Read more 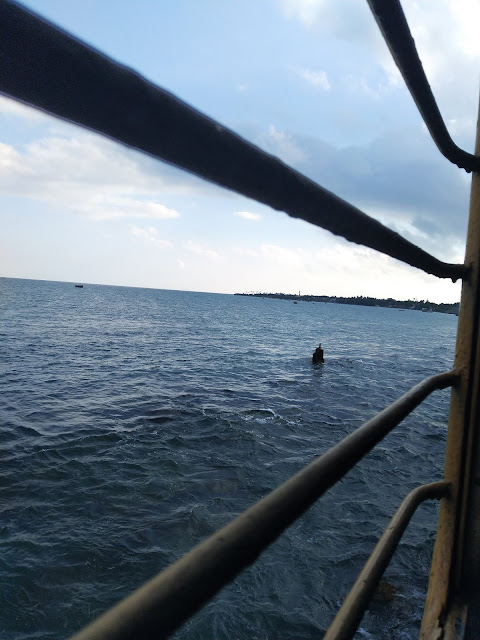 The train journey to Rameswaram, the temple town of India began on the 2nd day of 2020. While not much happened when we boarded at night but a book reading seshh and a not-so-interesting fellow cat calling modestly.  When I got up the next day at half past seven in the morning, I was in for a treat. The Pamban bridge is iconic and our Express train was just about to take us to the beautiful Pamban island, across the Palk strait, leading us into an experience I always longed for. For a person from Bombay and a lover of the Bandra-worli sea link, this surely isn't very fascinating.(Not bragging okay!?) But the train took this water baby, who has probably lived off her entire life watching the Arabian sea to an escapade she never preempted! BAMMMM! At Rameswaram, I earned a family, ate 4 idlis for Rs 20 every day, and handled Tamil people without my parents constant assistance.  Talking about Tamil people, I clearly remember the sight when I got down at the Ra
1 comment
Read more
More posts